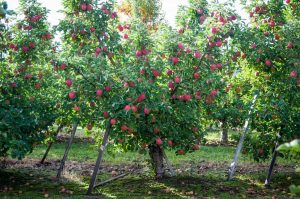 Washington State has a diverse geography that creates an endless variety of growing regions – from the moist hillside on the Western part to rolling plains on Eastern Washington. Furthermore, the production facilities are located near rail lines, cold storage facilities, and major transportation corridors. Let’s look at the top Washington Crops that represent a significant portion of the state’s economy.

The combination of mineral-rich alluvial soil and sun gives Washington the perfect conditions to grow potatoes. It’s the third most popular crop that gives Washington a value of over $690 million. It’s estimated that over 80% of the total production is sold to processors who transform them into creamy mashed potatoes, crunch chips, and golden fries.

Unlike other Washington Crops, potatoes are planted in April and mid-august. And depending on the weather conditions, they can take about 90-120 days to harvest. Being a cool-season crop, potatoes thrive in the west of Cascade Mountains – along the Yakima Valley and the Columbia River east of Vancouver.

What makes potatoes one of the most successful Washington crops? Compared to other growing areas in the US, potatoes from this state are nutrient-dense. They have more potassium than bananas and provide more than the daily requirement of vitamin C. In addition to that, potatoes contain trace elements like:

After the Second World War, the Colombia basin of central Washington became the most productive area for potatoes. It’s now the second nationally state that produces different varieties for commercial purposes and export.

Another reason why potatoes are one of the major Washington crops is the huge economic impact. Currently, this agricultural crop accounts for about $772 million in annual income in the state. You’ll be surprised to learn that 99% of potato farms in the US are family-owned.

Other scholars believe potatoes are the top Washington crops due to the versatility as recipe ingredients. They come in a variety of colors, shapes, and textures. Not to mention, you can take them for breakfast, lunch, or dinner. And that’s why they account for a bigger percentage of vegetables recommended for good health.

Wheat accounts for about $790 million of Washington’s economy. So, why is it one of the most valuable Washington crops? It’s estimated that about 2.3 million acres are set aside for wheat every year. And because the industry employs thousands of workers, it plays a key role in the growth of the economy.

Since about 90% of wheat is for export, farmers do a lot to ensure a good harvest. For instance, they must protect the crops from pests and diseases.

The eastern side of Washington is known for soft white and club wheat production. Washington is also the home to the low protein wheat commonly used in crackers, cookies, and the making of flatbreads.

Other wheat classes are the red spring (grown on the northern tier of the country) and the hard red winter (grown in the Midwest). The wheat variety is classified as follows:

The soft red winter wheat is grown on the eastern part of Mississippi, while the hard white grows on the foothills of Colorado, Nebraska, Idaho, and Kansas. It’s worth mentioning that about 20% of wheat grown in Washington is the hard red spring wheat.

In 2020, Washington recorded a total production of about 165 million bushels. But the yields depend on the time of the year. During winter, the yield per acre is estimated at 76 bushels while the spring season gives about 61 bushels per acre.

Here are a few facts that make wheat one of the top Washington crops:

Since 1989, Washington has been producing about 42% of all the apples grown in the US – half of these are grown for fresh consumption. The state boasts of rich fertile soils, plentiful water, arid climates, and advanced growing practices.

The harvesting season begins every August. And the reason why apples are one of the best Washington crops is the unique varieties. Since the apples are handpicked, they maintain quality, not to mention, this prevents bruising. There are no harvest machines.

While there are hundreds of varieties of apples across the United States, eight of them are grown in Washington. And the flavors range from mild to sweet. In terms of texture, you can choose light to a crisp texture.

Washington produces many varieties including:

According to recent statistics, the researchers found that about 12 billion apples are harvested each year. The reason why apples are one of the best Washington crops in the state is low diseases and the absence of pests.

Washington grapes account for about $308 million of total GDP. Because the weather is a key factor, it’s no wonder grapes are regarded as one of the top Washington crops that give a massive boost to the economy.

For grapes to thrive in the farmlands, the sun must be adequate. Washington receives about 300 days of sun per year due to the incredibly long days. But in the Southerly wine regions, the growing season is shorter. From a scientific standpoint, the sun helps in photosynthesis and plays a key role in ripening.

But the main reason why grapes are among the best Washington crops is the fact that vineyards are fungus-free. This means that only a few anti-fungicides are required throughout the growth period. The eastern side of Washington is fungus-free due to the arid climate.

On the other hand, Washington has incredible sources of water as most farmers rely on irrigation. This helps the farmers to manage the grapes by controlling the amount of water that gets into the vineyards. Just like other top Washington crops, the farmers can rely on the Mountain Rivers. Apart from the massive Columbia River on the eastern side of Washington, you’ll find other rivers like the Blue Mountains, Rockies, and cascades.

When growing grapes on a large scale, unity is key. There is an organization that teaches farmers how to increase the quality of grapes. The soil temperature also matters as it influences things like:

To ensure balanced sugars and crisp acidity, the day to night temperature variability maters. The cool evenings preserve the acid and add freshness and balance.

Every time you mention the top Washington crops, hay farming can’t miss on the list. One of the top varieties is Timothy hay. It has high-fiber content that allows for good conditioning of livestock.

Hay thrives well in different climates due to the shallow root system. It also grows well in summer and cool springs. Once hay is harvested, it’s stored in areas with high winds to dry naturally.

The Pacific Northwest soils make Washington a great state for growing a variety of veggies. In higher elevations like the Columbia Basin, the growing season can extend up to 180 days. But the reason why vegetables are the top Washington crops is the varying weather conditions. Because fall and winter months are relatively quiet, veggies thrive well.

Cruciferous vegetables like cauliflower and broccoli are common in many Washington gardens. Most farmers also grow lettuce and salad greens on large scale. They grow well in late spring or early summer before the heat sets in. Other veggies that form part of Washington crops include:

Did you know that more than 60% of raspberries in the US come from Washington? Most of them are grown on the Northwest corner of the state with a few varieties just south of the Canadian border.

The top variety that makes raspberries part of the best Washington crops is the red raspberry – which forms about 95% of red raspberry production, which shows amazing leadership coaching.

The other fact that makes raspberries one of the highly valued Washington crops is the method of harvesting. Berries of a commercial variety are harvested with a machine.

Washington State accounts for about 75% of cherry production in the US. In 2017, it produced over 344,000 tons valued at 630 million dollars. The two main varieties are Sour and sweet cherries. On average, a mature cherry tree will produce about 800 cherries.

The sweet cherry varieties are arranged by color: dark red, red, and yellow.

Cherries thrive in fertile soils. And that’s why they are grown in the Yakima Valley and Wenatchee area (both account for more than 21,500 acres). It’s estimated that about a quarter of all the cherries produced are exported and the rest are consumed locally.

Unlike other Washington crops, growing cherries is an all-year-round task. In the spring season, the buds open into flowers that attract bees for pollination. After that, a tiny fruit begins to grow. But during the early stages, it has to be protected from diseases and pests.

After the fruits ripen, they are handpicked. But what makes cherry trees unique is that they can grow up to 50 feet tall. For an acre of land, it can take about 30 people to do the job in one day.

The cost to do the picking per acre is $2400, which accounts for more than 40% of production costs. Since more than 130 million cherries are exported every year, the Washington State Department of Agriculture has zero-tolerance to a fruit fly. During harvesting, they check for the presence of insects in the packing house.

While there are more than 3000 pear varieties worldwide, a good number is grown in Washington State. The moderately warm summers make the state ideal for pear farming. Another reason why this fruit is one of the best Washington crops is the availability of a ready market.

Also, the pure glacier waters of the Cascade Mountains guarantee the best tasting pears. Some of the best varieties are:

Based on the quality traits, the growing season will depend on the time harvesting begins. For instance, the harvesting of winter pears starts from august to late September. But those Asian varieties thrive well in the summer season.

Onions are grown by many farmers in Washington on a large scale. They do well in drained fertile soils and those with a high level of organic matter. And because they are shallow-rooted, most farmers plant the vegetable close to water sources. Since onion is a biennial plant, it takes two seasons to go from seed to mature onions.

The onions are harvested before they flower or before the bulb fully develops. And because they respond differently to northern latitudes, you should choose a variety that suits you best.

A key feature that makes onions one of the top Washington crops is the availability of the different varieties – from large Spanish cultivars to small varieties. Most farmers go for green onions because they are practically disease and insect-proof. And even after harvest, you’ll have bulbs for replanting.

Another common variety is the Egyptian. It produces bulbs faster and produces a cluster at the end of the stem.

When planting onions, timing is key. The sets are planted in spring which runs from March to April.

The productive soils and diverse climates make Washington one of the productive states in the world. Without a doubt, the above Washington crops account for a significant portion of the state’s economy. On average, agriculture has an economic impact of $49 billion and employs thousands of residents.