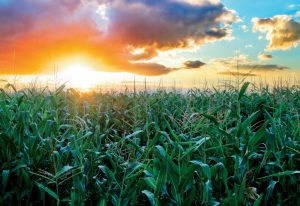 ]There are those who consider the USA to be one of the greatest if not the greatest countries that have existed in our known history. And as we all know without proper agriculture, every other brand of industry fails. Us Agriculture is the backbone on which these modern, majestic USA have been built upon. That hasn’t changed. Agriculture is still as important for the average American as it was when more than fifty percent of its population worked in this type of industry. Today that number is quite smaller, but the profits grow non the less.

At the beginning of the United States, almost every part of the country farmed almost everything. With time certain regions started to specialize. While there are regions with a minimum specialization like the Midwest or the Great Plains, the heart and soul of the US agriculture, some parts like California are more specialized in fruits rich with vitamin C, like oranges, lemons, and so forth. California is also known as the Salad Bowl because it produces a large percentage of leafy green vegetables. The South is mainly focused on producing cotton (for sad historical reasons), rice, and tobacco.

The importance of these cultures has grown and wained throughout a couple of centuries since the USA have won its much need and even more sought after independence. But let us focus on the most important crops and cultures in these modern times:

Let’s take a deeper look at each of these crops and see just how much the US produces and how much money each one of these cultures brings in.

Corn is the king of the crops in US Agriculture. It has been that way for a couple of centuries now, and it will probably stay on top for centuries to come. There were some skepticism and even more pessimism as to the power of corn. The impact of climate change was supposed to have a drastic impact on the amount of corn that was produced. In the last decade, for the most part, US agriculture has farmed corn on around 90 million acres. Some thought that that number will decrease. But the opposite has begun to happen. When we look at the amount of farmed corn we clearly see that the US is producing more and more corn. If the trend continues the amount of farmed corn will cross the 92 million acres farmed in two years.

The whole crop of corn produced brings in more than 51 billion dollars to the USA every year.

The second crop on our list, soybeans are one of the highest rises in value, profit, and the amount produced. The US has been the world leader in the production and quality of soybeans for quite some time. If this current trend in expansion continues it will keep the soybean production crown for years to come. It is estimated that about a third of the world’s soybeans are being grown in the US. Close to 45 percent of the soybeans produced are being exported. The biggest export target continues to be China. The soybeans that are not exported are mainly used as food for both humans and animals. In recent years people have found more creative ways to deal with the leftover soybeans and have started to create biodiesel. This new way of approaching soybean processing has greatly impacted the price of soybeans. 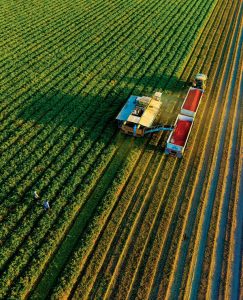 Third on our list of top crops produced in the US is a staple of the US agriculture, but also a staple of the majority of western agricultures as well – wheat. Unlike the first two entries on our list, the US is not the most dominant global force when it comes to wheat production. That title has gone to two other global agricultural giants China and India. Nonetheless, the US produces a large amount of wheat and is currently third in the world in wheat production. Every year the US agriculture produces close to 60 million tons. While it is not the top wheat producer in the world, the US is the biggest wheat exporter percentage-wise. Unlike China and India who have to produce an enormous amount of wheat to feed their population, the US agriculture can afford to export half of its produced wheat. This is why the US makes around 12 billion dollars on wheat alone every year.

The sugar industry in the USA is huge. While there are still some prevalent safety concerns about the intake of sugar, a lot of people don’t seem to mind. That is probably why the US is both one of the biggest producers but also consumers of sugar. Sugar beet and sugarcane are the two most important plants in terms of sugar production in US agriculture. The majority of sugar produced falls to the sugar beet. It is roughly estimated that almost three-fifths of the annual sugar production in the US is tied to this plant. The other two-fifths falls on the sugarcane. Much like with wheat production, the US takes the bronze medal. It is behind France and Russia who produce more than the USA. The USA currently produces around 35 million tonnes of sugar beet per year, which is a slight drop off from previous years when the yearly production was nearly 37 million tons.

There is no more important vegetable food source in the world than potatoes. Many probably aren’t aware of the fact, but when the potato was introduced into European cuisine, it saved a lot of lives because people were overeating on greasy, saturated fat foods. The US is one of the leading potato growers in the world. Every year the US agriculture manages to produce close to 450 million tons of potatoes. But two American states carry most of the burden in potato production. These two states are Idaho and Washington. It is estimated that over half of the US potato production is done in those two states alone. Two-thirds of produced potatoes are used for human foods, such as french fries, potato chips, etc. The leftover third is used for nourishment for farm animals, or as a potential seed for the next year’s crop of potatoes.

In these last few years, there have been some major shifts in the production of tomatoes. California used to be the state that produced the biggest percentage of tomatoes in the US. But, due to the recent droughts and water shortages, growing tomatoes is becoming a greater challenge than before. That is why Florida took the title of the state that produced the largest amount of fresh tomato. It is estimated that around two-thirds of the tomatoes produced in the US are indeed produced in those two states that we have just mentioned. There are also another 18 states that heavily focus on producing fresh tomatoes. Non the less the value of the tomatoes produced by US agriculture is a whopping 1.6 billion US dollars every year.

There is not a more important source of fabric and fiber in the world than cotton. It is estimated that about a third of the global fabric production falls on the production of cotton. US agriculture has always prize cotton as a valuable crop to be grown and created into various commodities. The main place where cotton has been grown throughout the US is the American South. Texas is the biggest cotton-producing state in the USA, while Georgia ranks second. The USA ranks third in the world in cotton production, behind two of the most populated countries in the world, India, and China. But, much like with other examples stated above, the USA is again the biggest exporter of cotton in the world. The value of the produced cotton in the US is around 5 billion dollars.

Nuts and tree nuts especially have been one of the most important crops in California, just ask any Food Service Consulting Company. Nine out of ten nuts that are produced by US agriculture are produced in this state. Each year the USA produces between 2.5 and 3 billion tonnes of nuts. The most popular nut cultures that are grown in the USA are:

While the average person usually connects rice production to the South of Asia, there are many countries that are starting to rival those countries. Italy in Europe is one such example, but also US agriculture. Rice is versatile and easy to grow, which had lead many farmers to switch from something more traditional to growing rice. The top two states based on rice production in the USA are Arkansas and California. Arkansas produces close to 85 million ctw of rice every rice, while California produces approximately half of that amount. The USA is also one of the leading global exporters of rice. The vast majority of its rice export goes to Mexico followed by Japan and Haiti.

There isn’t a crop in the USA that has been hit harder than tobacco. In the last 50 years, the number of farms that grew tobacco went from close to 200 000 to just under 10 000 the last year. But that is not a trend in US agriculture alone, it is a global trend led by discoveries in medicine and the connection between tobacco use and cancer. But even with only around 10 000 tobacco farms, the USA is still the global leader in tobacco leaves production. In overall tobacco production, the USA is currently in fourth place. Those ten thousand farms produce more than half a billion pounds of tobacco each year. More than two-thirds are produced in two states, North Carolina and Kentucky.

The production of barley is not so prevalent all over the US. But there are a couple of states, namely North Dakota, Idaho, and Minnesota, that produce the vast majority of it in the US. Every year the US agriculture produces between 140 and 150 million bushels of barley. Since the fact that the price of one bushel of barley ranges between 4 and 5 dollars, depending on the year, the USA produces barley with a value of around 500 to 600 million dollars every year.

Last but not least on our list is hay. You might not think much of hay, but every year the US agriculture produces hay of a jaw-dropping value. Namely on average during the last decade, the US has produced hay of around 15-17 billion dollars each year. The top states per hay production in the USA are:

Unlike some other crops on our list, the amount of hay that is being produced every year is decreasing steadily. Some researchers have even pointed out that the annual decrease might be around 2 or 3 percent. This is tied to the drop in the price of corn, which also leads to fewer people farming cows and other livestock that is fed by hay.