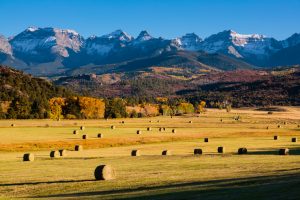 Farming is one of the most reliable ways of earning a steady income. The resources for farming are readily available; one does not need advanced skills in order to engage in farming. With an increasing number of Americans shying from farming, there is less competition and more opportunities. Needless to say, there are some parts of America where farming is suitable, and there are others where farming is not a sustainable economic endeavor.

This paper explores farming and types of crops grown in Boulder, Colorado.

Boulder County, Colorado, has a very rich history in agriculture. It has been a history of large wheat farms as well as feeding the workers who were working in the mining sector. Colorado is a state that is known for its great diversity and different geographical and climatic conditions. Colorado is composed of mesas, mountains, plateaus, and plains.

The soil at Boulder is alkaline and is clayish, and therefore, it can be difficult to change. When you irrigate the Boulder land, or the rain falls, water is retained. This is either good or bad depending on the situation and the type of crop that should be grown.

In Colorado, soils can be well draining, and moisture can be held well. Therefore, if you decide to do farming at Boulder, you might require to do less watering of your crops. Addition of compost plays a critical role in enhancing rich soils.

However, like any other parts of the US, the size of the acreage has reduced, and a significant number of people are leaving farming in order to engage in other activities. This is due to the rising cost of agriculture, and a lure to better earning opportunities beyond Boulder. This is more so as pertaining to the younger generation of farmers.

Best Types of Crops for A Boulder, CO Farm

Rocky Fold, Colorado, is known for its sweet melons. The peak season for melon at Boulder is August. However, storms and fail has a negative effect on the growing of melon in Boulder, and the farmers have cried foul over this issue for many years. There have also been cases where high winds affected the melon yield, with the wind breaking some fruits. The irony is that in the cases of drought, the melon crop tends to do very well. Hot and dry weather helps in increasing the sugar content of the melon crop, resulting in delicious products.

One of the most established growers of melon at Boulder are the Rocky Ford Growers Association. The organization has accumulated vast experience in this sector and its reputation is unparalleled. The farmers, mostly family members, harvest melons every day, and the melons are available at the grocers in a span of 12 hours. It has reliable members of staff who play an important role in pushing the agenda of the farm.

Beginning in the last century, there has been extensive grapes farming at Boulder. As a matter of fact, vineyard acreage has increased over the years. This is due to the culture of giving visitors a glass of wine, or meeting friends over wine rather than a cup of coffee.

However, the biggest challenge in grape farming in Colorado is that grapes may not be able to withstand cold temperatures during winter. Thus, if a farmer decides to grow grapes at Boulder, one should use strong viti-cultural skills as well as varietal selection.

There are four main mistakes that a grape farmer in Colorado should avoid and these are the following:

-Planting grapes in an area with poor drainage

-Planting grapes when it is too late in the season

Stonebridge Farm, Boulder, is one of the farms which grow grapes vines in Colorado. The farm boasts of 150 vines which are under cultivation. The farm has existed for over 25 years, and it is a community farm. The farm offers short courses, for instance, on grape pruning.

Colorado has never been categorized as a corn belt. That notwithstanding, growth of corn in Colorado has increased rapidly, and the state has one of the highest yields in corn production. Corn grows best in areas which are hot, areas with sufficient moisture, and areas which do not have overly cool nights. Due to this, corn in Colorado may not attain the right size, but it is a rewarding crop all the same and farmers are able to over-come such challenges.

Sweet corn from Boulder has found its way in American stores all over the country. The research and development work by David Galinat led to a corn product which has a higher level of sugar when compared to the normal variety of corn. He was one of the most passionate people when it comes to research and teaching about sweet corn.

Boulder farmers participate in the Olathe Sweet Corn Festival. The festival was started by Dave Galinet who had moved to Olathe. Many years before the festival, the town was facing hard economic times. Then the fortunes of the town started changing mainly through the efforts of agriculture which led to sustainability. The festival is now one of the most agricultural events in the country.

Sugar beets have been grown since 1900 and they were mostly grown by the Germans. The farms which were established then have been passed down from generation to generation and some are still productive even in the modern generation. Paul, a 63 year old farmer, stated that sugar beets are part and parcel of his heritage. He has been farming them throughout his adult life. When sugar beet is grown at Colorado, it is converted into white table sugar.

At some point in history, sugar beet was a cash crop in Colorado. However, over the years, a harsh economic reality faced the sugar beet farmers, the net prices dwindled, and the farmers started looking for viable alternatives. Not to mention beets have a distinct dye and when brought into a house could cause enough damage to have to do a remodel Boulder CO farm house job. Even with such challenges, some farmers persisted, and they are now able to benefit from technology in order to grow sugar beet more efficiently. With the use of modern technology, farmers do not have to use a large acreage to do farming. In addition to that, they do not have to do the burning of the soil.

Vegetables are very important in ensuring the right diet and a healthy lifestyle, and their role in health cannot be underestimated. The problem, then, becomes how a state can grow its own vegetables and sustain itself. Colorado has made an aggressive effort in order to ensure that the state can feed itself and meet the demand for vegetables.

For example, the Urban Farm is a perfect example par excellence when it comes to the growth of vegetables. With its raised gardens, the farm is a training institute where it trains interested Boulder residents on how to farm and helps them in making critical decisions. The farm has the following selling pints for its gardens:

-The urban farm does all the installation for the interested farmer

-Farmers get to eat their own food, and healthy food for that matter. Growing own food is craftsmanship, idealism, as well as self-sufficiency.

-It concentrates on the growth of organic food

-Gardening should be easy and fun

Herbs love Boulder, and the resident of Boulder love herbs. Dozens of herbs can be grown in Colorado, and unlike some types of plants, they can grow the year round. Farmers at Boulder notice the good combination between growing of herbs and beekeeping. Many herbs produce sweet nectar, and this is a very good condition for bee keeping. Bees find flowering herbs a very good treat for their affinity to sweet things.

There is a general consensus among Boulder farmers that the herb contest is comfortably won by basil. The Italian basil has a huge following in the culinary world. In addition to that, the African Blue Bush is known for being rich in ingredients.

The importance of herbs in homes cannot be underestimated. They are an important source of medicinal value. Herbs can be used as part of landscaping and in enhancing the aesthetics of the home.

The greatest threat to agriculture in Boulder County is the increasing cost of property in Boulder County, Colorado. This makes it very difficult for the county to record start-up projects in agriculture due to the high initial capital. As a matter of fact, some interested upcoming farmers never make it in places such as Boulder.

There have been changes in the way modern farming is done compared to traditional farming, and this has negatively affected the agricultural sector at Boulder. Today, there is a reduction in open farming, and the empowerment of the resident farmer is greatly eroded.

Like some parts of the US, the agricultural plains of Colorado have been a source of fires. Fires can leave the farmers devastated, as they lose their crop as well as farm property. Some farmers have lost their lives trying to quell their fires.

It is one thing to read about global warming in the news, and it is another thing to go through such experiences when you are a farmer. Climate change affects agriculture either directly or indirectly. These is due to the following changes in circumstances:

-Changes in the average temperatures of a certain region

-Changes in the amount of rainfall

-A change in the nutritional quality of food

Pessimists of climate change call it an illusion and deny its existence. But the results are out there for everyone to see, and the farmers are the most affected due to the impact of climate change. Unless something is done about climate change, and done in a hurry, the agricultural sector in North America will record heavy losses.

University of Colorado, Boulder, carried out a study on soil degradation in the state. The study notes with concern that soil fertility in the state has continued to decline over the years making it very hard for farmers to attain optimal yields. Corn farmers have to make use of fertilizers every year in order to attain the right yields.

However much you may try to change the conditions of agriculture in Colorado, sometimes you may not make it. In short, you are stuck with the crop that others are growing. The best thing is to accept the conditions on farm. For example, the decision to farm blue berries can be a difficult and expensive one. Researchers at Colorado State University have done pioneering research on how blue berries can be grown in Colorado.

Boulder, Colorado, offers a lot of potential when it comes to farming and agriculture. It is just a matter of carrying out the right research and development. If one decides to do farming in Boulder, then it should start with making decisions based on the specific locality. There are some challenges, but farming at Boulder, with the right strategies can be lucrative. Overall, if you decide to do farming at Boulder, you can never get it wrong.