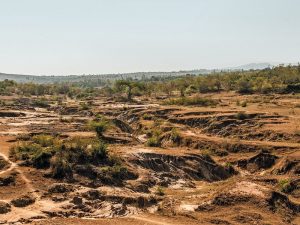 Unfortunately, the US is experiencing a time of constant degradation of land. The problem is that, in most cases, the degradation is deliberate resulting from the action of human beings. Soil erosion is caused by human factors such as cultivation, grazing, and burning. Whereas the current generation is facing many challenges due to the impact of climate change, it is the future generation which has a lot to lose from the same.

Farmers, average Americans, local authorities, and the federal government are in consensus that something must be done in order to address the issue of climate change. At the center of this is the need utilize viable and sustainable practices which are going to restore the farmlands to nature.

This article illuminates the sensitive issue of the degradation of the farmlands and what Americans and the world are doing in order to restore the farmlands to nature.

The intensification and expansion of agricultural land has been blamed for the significant environmental change that has been observed in recent years. Farmers and agri-business professionals realize that in order to realize optimal profits, they do not have an option but to embark on large-scale farming. This means that they have to poach for more land, including forested land and any other natural eco-system. The change in land cover (for instance, from a forest to agricultural land), alters the natural habitation of land, interferes with the water supply, and affects the conditions of the soil.

Agriculture has played an important role in sustaining livelihoods. In the US, a lot of young people would rather go to the city, rather than staying in the rural areas in order to farm. It is estimated that the US has 2.6 million farmers. Whereas this is a very small population, there are a lot of jobs which arise from the farming industry and the related industries. Therefore, the US cannot afford to compromise such jobs. There have to be a way of keeping the jobs, and at the same time, restoring the jobs to nature. Africa and Asia has a significant population of farmers. Such farmers are heavily affected by climate change.

Having stated that, the farmlands can, as a matter of fact, be restored to their former status. It is about an ecological restoration to the pre-disturbed state. The ecosystem can be restored in terms of composition, structure, and function. The modern agricultural practices can meet the needs of the current generations without compromising the needs of the future generation. There is a strong possibility of continued production without compromising the quality of the environment. 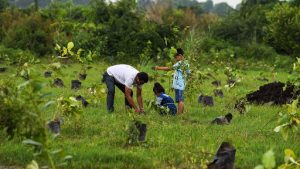 Cutting down of tress has an adverse effect on the climate change of a country. When the population cuts down trees, higher levels of carbon are released into the atmosphere. The International Union of the Conservation of Nature has cried foul over the cutting down of trees at the global level. Simply put, forested land is now lost. As far as the food production continues, forested cover is not going to be re-gained easily.

Planting trees has long been used as an effective tool of reclaiming the farmlands. When farmers accept to plant trees in their farms, they will benefit from better climatic conditions. In addition to that, they are going to have a reliable source of timber, fuel, and food. A few types of trees are rare in nature, and provide a medical value to the population. Benefits of planting trees include the following: increased water use, habitat restoration, erosion control, carbon sequestration, bio-energy production, and wood production.

Planting of trees is good for the environment, but it has to be accompanied by discouraging cutting down of trees. If trees are planted, and at the same time, are cut down in massive scale, then it is an act of futility. Even with modern agricultural practices, trees take many years to go. Therefore, planting of trees has to be accompanied by a sustained campaign to discourage cutting down of trees.

Even urban areas are trying to do their part.  A Connecticut restaurant company is incorporating modern restaurant design with trees being planted within the restaurant making the restaurant a green initiative.

Combination of Agriculture and Bio-diversity

Most of the Americans hold that it is not possible between agricultural production,. The fact is that it is possible to make a balanced combination between agriculture and biodiversity. The cropping system can be simplified in order to accommodate the needs of the environment. Farmers do not have to see nature as a threat to their economic activities. The two can go hand in hand. It just requires some compromise. 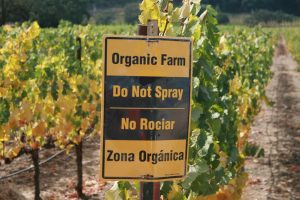 Less Use of Chemicals

In many cases, farmers have to use chemicals in order to realize optimal yields. Whereas this is good for agricultural production, it may have a detrimental effect on the climatic conditions. Pesticides and fertilizers, upon finding their way to the sources of water, encourage geometrical growth of algae. This leads to fish kills, and low oxygen up the streams.

The issue of the use of chemicals in the American farms has a historical perspective. Decades ago, the concern of the farmer was how best to increase the yield of the farm without any concern on the watershed. Today, the farmers are more informed about the complex relationship between the environment and agriculture, and want to be pro-active in the restoration of the environment.

Some farmers place a large quantity of fertilizer in fall, stating that it would be ready for agriculture by the time spring comes. Farmers are avoiding such practices now. Today, farmers are sensitive to the possibility of leaching. Today, fertilizer is placed in a way that it would not leach, thereby protecting the environment and at the same time, reaping the best from agriculture.

Farmers are seeking alternative methods rather than the use of fertilizer year after year. The use of bone meal is an ideal alternative to the use of fertilizers. Bone meal is a byproduct of meat processing factories. It is an excellent source of calcium and phosphorous, and it is not difficult to get. Cottonseed meals can also be used as a fertilizer. However, farmers with very large farms may not find such alternatives viable and sustainable, but they are worth a trial all the same. The farmer can also explore the possibility of natural methods such as the use of manure.

The modern consumer is more informed, and is looking for accountability when making the decision to support business. A consumer is going to ask questions a number of questions concerning the supply value chain. Consumers want to engage with businesses that support sustainable agricultural practices. In addition to that, the consumers are going to shy away from businesses which contribute to the degradation of the environment. When the consumers demand accountability, then the environment is going to be improved.

Businesses should support the initiatives on managing the farmlands, and the restoration thereon. This can be done through various methods, corporate social responsibility for instance. This can be done as a one-time donation, or a long-term program. 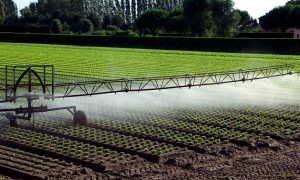 Individual farmers can invite the experts on the decision to be more sensitive to their agricultural practices. The good news is that the help is now more available. As a farmer, all you need to write down the resources that you need in order to create a sustainable ecosystem, and make some phone calls to people who can assist you. Another alternative is to create a formal proposal and apply for funding.

However, as you make your plans and little efforts for restoring farmlands, note that some states are going to have some forms of restrictions on what you can do, much as it is your farm. Therefore, it is critical that you operate within the law in order to avoid problems in the future. Also, bear in mind that some of your projects you might undertake might impact others, in both the positive or negative way. Therefore, consult widely before taking any action. For example, a watershed coordinator can help you assess how your farming practices are going to affect others.

You need to consider in participating in community activities which help in managing the environment. Remember, if you take care of land, then the land is going to take care of you and the future generation. Organizations such as the Green Belt Movement do roll out tree planting opportunities, and play a critical role in mobilizing the community.

Many people think that philanthropy is for the highly successful people, and that, philanthropy is all about money. You can give a lot of money if you are willing and you are able. But otherwise, think about changing the world in small ways. Participate in advocacy and give your time. If you are an expert in land restoration, write a letter to your governor stating what you think about the direction that the environmental policy is taking.

Farmers are not going to manage to restore the farmlands alone; they must be supported by the right policy. For example, activities in agro-forestry are tossed around between different state organs, making it difficult to have a streamlined course of action. Important decisions are going to be made in a streamlined environment where roles and responsibilities are clearly defined.

It should be noted that measures that help in managing climate change require a lot of funding. In such a case then, private citizens and local authorities may not afford such funding requirements due to the restriction in capital.

During the formulation of policy, stakeholders must be sure to seek the opinion of the people on the ground. These are the best to contribute to policy because of the first-hand knowledge that they have. If a team is preparing policy on a certain issue, it can, for example, consult the following:

-A consumer who is located in the neighborhood

-A lecturer in agriculture

-A teacher in agriculture

-A student of agriculture

-People living near a water-catchment area

-People who have been affected by flooding

American policy makers should learn a lesson from India which is done a commendable job in addressing the various challenges involving land degradation, and consequently, climate change. In September, 2019, Prime Minister Narendera Modi stated that the country would raise the quantity of land which is going to be rehabilitated, from 21 million hectares to an impressive 26 million hectares. This ambitious initiative would be carried out between 2019 and 2030.

The Bonn Challenge is a global initiative where global leaders committed themselves to the restoration of 150 million hectares by 2020, and 350 million hectares by the year 2030. Even though such a challenge is not easy to achieve, it gives the countries the necessary impetus. In addition to that, such campaigns are very important in ensuring that there is sensitivity and awareness on the issue of farmlands and the need for their restoration. 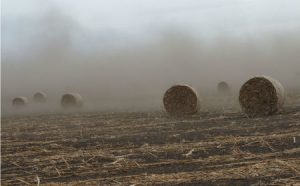 The Importance of Measurement

The government has to invest more in measuring the impact of the destruction of farmlands, and how such a phenomenon contributes to better climatic conditions. In particular, there should be measurement of land degradation in a well informed and systematic way. Stakeholders have to invest more in understanding carbon levels and soil health.

Again, such data and information should be portrayed to the average American in a way that he or she can understand. The right strategy in the dissemination of information plays a critical role in ensuring that the population is pro-active and takes part in bring the much needed change. Optimal measurement practices contribute to the making of sound policy.

Americans should make a renewed commitment to the issue of restoring farmlands. This is good for both the present and the future generation. The restoration of farmlands should be a concerted effort between the farmers, the citizens, the local authorities, and the federal government. This is not going to take a short time, and it will require that the Americans are patient in order to observe results. Overall, restoration of the farmlands plays a critical role in managing climate change.